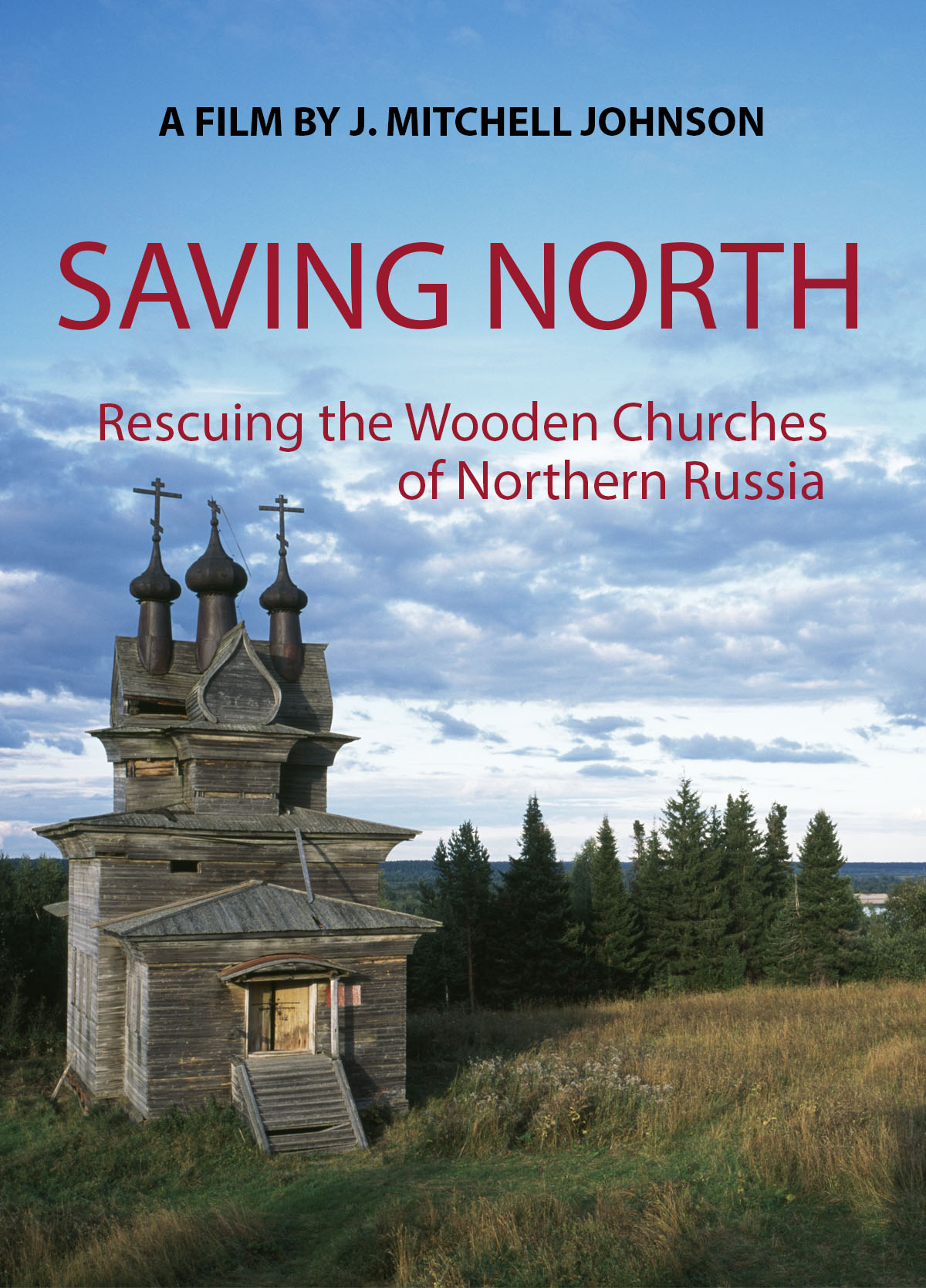 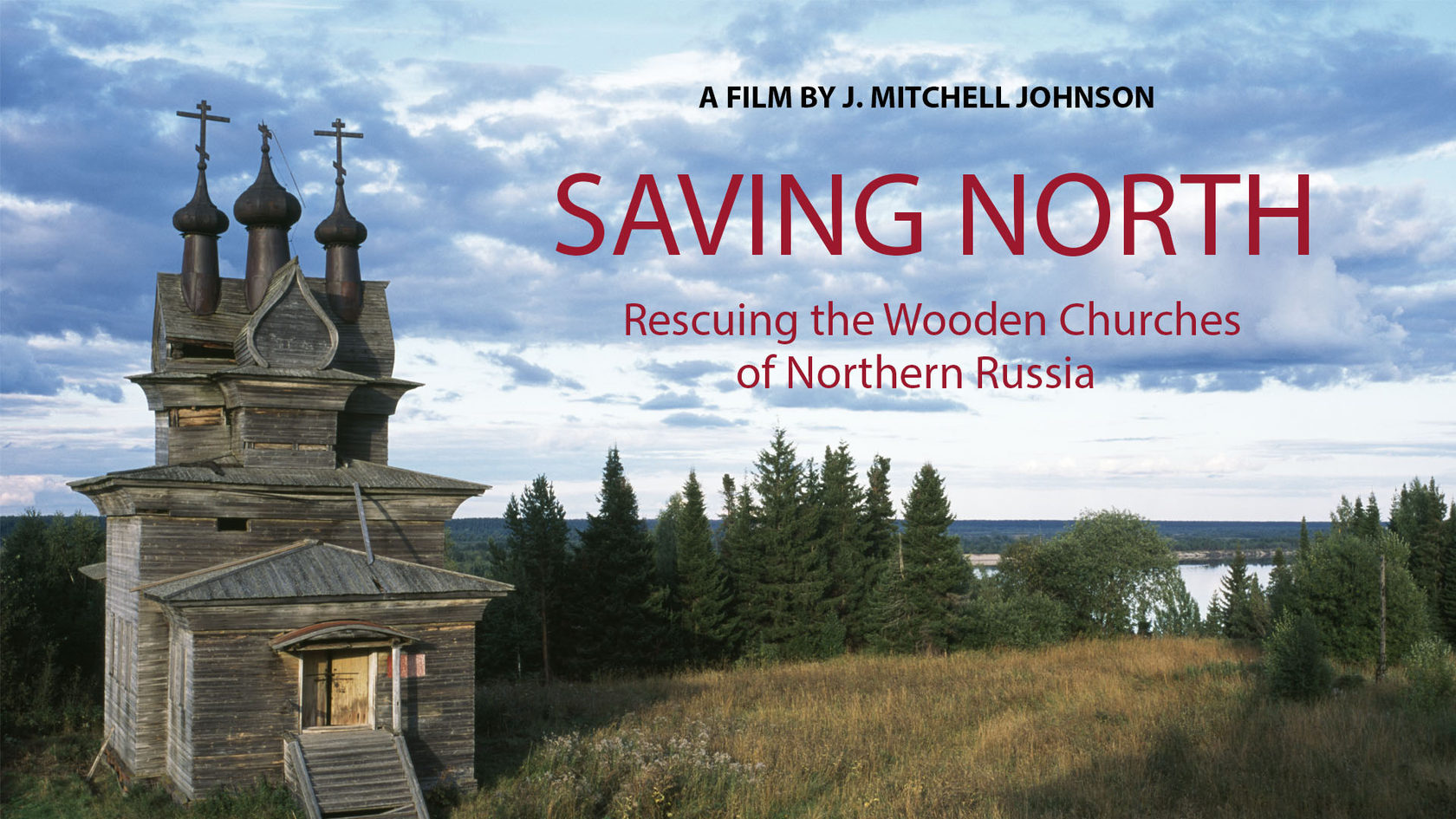 "SAVING NORTH: Rescuing the Wooden Churches of Northern Russia" is the story of a struggle for human and cultural survival in the insular world of the Russian North. An outsider from England, architectural photographer Richard Davies, enters this mysterious and vast region of the world with the hope of documenting both the glory and the tragic demise of its rapidly disappearing wooden churches. As Davies meets and becomes friends with some of his Russian photo subjects who strive to save these churches, he finds himself getting emotionally involved with their struggle. Finally, he decides to put down his camera and help with the restoration of a bell tower in a tiny village on the river Onega.

Early on in our story Davies befriends the famed Russian architect Alexander Popov, who is deeply involved in working to preserve and share with the world the beauty and value of these ancient structures. Popov has uniquely discovered and reinvigorated both the ancient tools and processes that can restore life to the wooden structures of the North.

Davies and Popov uncover the circumstances that led to the demise of the churches, and then join a small but growing group of passionate Russian citizens and outsiders from all walks of life who join the cause of SAVING NORTH. But it is an uphill battle against time and the powerful forces of nature and societal neglect.

I am an American filmmaker who has been living and working between the US and Russia for more than 25 years. Over this period I have made movies and created media projects about Russia. In 2009 I married my wife, who is a Russian citizen and prefers living in her homeland. That is why I began to spend significantly more time in Russia than elsewhere. We live together in Rostov-on-Don.

Eight years ago I was introduced by a business associate to the architect Alexander Popov, who was replicating an 1814 wooden windmill in Russia to be ultimately installed at Fort Ross State Historic Park north of San Francisco, California. I traveled to Mr. Popov's compound in Kirillov for the first time in May 2012. After that initial trip I kept filming him over the months, first in Russia and then in America where the windmill was installed. I became fascinated with Mr. Popov as a kind of person one rarely meets. I also discovered that he had restored some beautiful and ancient wooden churches in the Russian North that I had come to greatly admire. I decided to follow his work in Russia further.

After the windmill project was successfully realized and documented, I was back in Rostov-on-Don in February 2013, thinking about next steps for this film material I had on hand. It was on a cold winter's day when I stumbled upon the website of the London-based architectural photographer Richard Davies and his story of writing a book titled, "Wooden Churches: Travelling in the Russian North." Suddenly I decided to simply call Mr. Davies and introduce myself.

Mr. Davies answered the phone in London, and I quickly introduced myself as an American filmmaker interested in Russian wooden architecture. Mr. Davies warmed up as I told him the story about my filming with Alexander Popov. It turned out that Mr. Davies had met and photographed with Mr. Popov on more than one occasion.

Towards the end of this telephone chat, Mr. Davies revealed that he would be mounting an exhibit of his photographs in a southern Russian city called Rostov-on-Don the very next month. The rest is history. Mr. Davies and I met and began to work together. During the period 2013 through 2017, I would film with Mr. Davies many times as he visited different places in the Russian North and in and around his studio in London on three different occasions.

"SAVING NORTH" was born with the help that coincidence often provides when life's purpose meets opportunity. Eight years after initial photography began, the film matured into its own substance and identity–after many twists, turns and flows of support from people who I will always remember and appreciate.

J. Mitchell Johnson self-made "SAVING NORTH: Rescuing the Wooden Churches of Northern Russia" as a labor of love over an 8-year period with the help and support of various colleagues in the USA, Russia and the UK. He was director, producer, cinematographer, writer and editor for the film.

In 2012 Johnson began a new slate of independent documentaries with "SAVING NORTH." Films currently in production include "Remaining Human: Becoming Norbert Wiener" and "Coming Round: The Kashia Band of Pomo Struggle for Homeland."

Johnson is a past President of the Lone Star Film Festival. He serves on the board of San Francisco's TRACK TWO: An Institute for Citizen Diplomacy.

Dennis Bishop has won numerous awards for motion picture productions in various media, served as vice president of production at HBO Pictures, and managed several companies in different industries. He has worked off and on with Johnson since 1982. Bishop has chaired committees at the Directors Guild of America, Producers Guild of America, and the Academy of Television Arts & Sciences. He was a resource advisor for the Sundance Institute, served as director and later advisor of the Lone Star International Film Festival and Film Society, and was a co-founder of Earthx Film Festival.

Denis Luzanov is a Moscow-based film editor and producer with a long list of dramatic and documentary films under his belt. Most recently as a producer and co- producer, he has been responsible for Kerosine (2019), A Lifetime Ago (2018), and Turkish Saddle (2017). He is also the founder and owner of Tritona Studios in Moscow, a distributor and production facility specializing in fiction and non-fiction films. He has worked with Mr. Johnson on various projects since 2011.

Jonathan Sanders is one of the West's leading experts on Russian film-based visual culture. He has written two books on the subject, "1917: The Unpublished Revolution" (NY: Abbeville Press, 1989) and, with Hedi Hollinger, "The Russians Emerge" (NY: Abbeville Press, 2002). Dr. Sanders has worked extensively on television news programs, specials, and documentaries, including consulting on the website component of the award-winning "Red Files" series, produced by J. Mitchell Johnson & Abamedia for PBS. He spent a decade as a Moscow-based CBS news correspondent.

British architectural photographer Richard Davies has spent 10 years traveling in northern Russia in search of disappearing wooden churches for his acclaimed book of photos and essays, "Wooden Churches: Traveling in the Russian North," which he co- authored with Matilda Moreton in 2011. As a result, he has become well known for his obsession with Russian churches and the culture of northern Russia.
"The New York Times" and other global media publications have featured his story in newspapers, television, radio and magazine articles. Now, somewhat reluctantly, he finds himself in a new and unexpected role as one of the global spokespersons for a growing movement to keep the last of these disappearing churches alive.

Born in 1951 in Moscow, Alexander Popov studied engineering before eventually finding his calling: architecture, building crafts and restoration of wooden monuments and other structures. Having graduated from the Moscow Architectural Institute, he moved to Kirillov in the Arkhangelsk region of the Russian North. He began work as an architect and carpenter that specialized in the repair of wooden churches and monuments.
From 1981 to 1988, he and his team restored the church of Dmitry Solunsky in Uftyuga. He managed to rehabilitate the historical technologies and tools used to build the church in the 1780s. From these working methods of restoration, he developed a set of principles that became standards of restoration of monuments of wooden architecture. In 1991 he was awarded the State Prize -- restorer of the highest category, for his work.
Popov used those same standards in 2012 to replicate an 1841 wooden windmill for the 200th anniversary of Fort Ross, the Russian settlement in northern California. He led the manufacture of the wooden windmill in Kirillov and its reassembly for the bicentennial celebration at Fort Ross State Historic Park.

The Russian Orthodox priest, Father Alexei Yakolev, is the founder of the nonprofit group called Obshee Delo, which, when translated into English, means "common cause." The cause is to save and pass on to posterity the wooden temples and monuments of the Russian North. Obshee Delo's main objective is to support the revival of the wooden churches by uniting caring people seeking to preserve the ancient shrines of Orthodoxy and monuments of wooden architecture.
Accordingly, each summer Obshee Delo trains volunteers to carry out emergency operations such as repairing roofs, fixing broken windows, and replacing rotten crowns in foundations. Without this fundamental work, many of these wooden shrines will soon collapse and disappear, just as have the hundreds of northern temples that have tragically vanished.